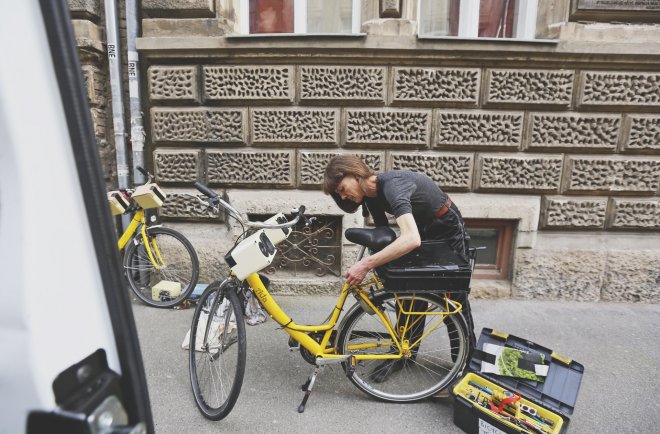 In 2013, together with her colleague Dave Griffiths, the musician and composer Kaffe Matthews founded The Bicrophonic Research Institute (BRI) in London, which annually produces several site-specific music projects in collaboration with national and foreign producers and organizations. The result of nearly ten years of work and a multitude of projects, today a part of the BRI’s artistic offer, is the sonic bicycle – a bicycle with two speakers mounted at the front, and a GPS receiver and Raspberry Pi computer at the back (https://sonicbikes.net/sonic-bike/). The team has developed a software, which maps different locations and connects specific sounds with them to get motion-sensitive interactive installation.

Depending on the location and the pedaling rate, the sonic bicycle plays selected, suitable sounds, transforming the open space of the city or a smaller area, along with its socio-political context and architecture, into an open concert hall which gathers its audience at every step or, better said, every turn of the wheel. The sonic bicycle project is permanently developing – its interactivity and accessibility to all types of users is regularly upgraded.

The sonic bike is part of the Homage Urbofest '79 program block and is a response of a kind to Michael Fahres’ Mobilodrom, presented at the 10th MBZ, Urbofest 1979. This was an electric vehicle resembling a car, which produced sounds according to the type, intensity and tone pitch or noise of the environment. The computer incorporated into the vehicle reproduced a sound response to the sound of the environment in real time, either clashing with it or complementing it. The Zagreb version of the sonic bicycle to be used at the 30th MBZ was created in collaboration with the students of the Vocational School for Personal Services, who spent a week in a workshop with Kaffe Matthews, shaping various sounds, talking and reading poetry, in order to subsequently create a sound base for this year's Biennale sonic bicycle.

After the opening ceremony that will be held on April 4 at 6 PM in the Greta Gallery, a ten bicycles will be exhibited and available for use at the same location every day from 11 AM to 7 PM until the end of the 30th MBZ. Visitors will be able to rent a sonic bicycle for a ride on a pre-devised 45-minute route. During that time, they will simultaneously experience being a composer, a performer and an audience on the street that will act as an extended and intertwined concert hall with hundreds of random visitors.