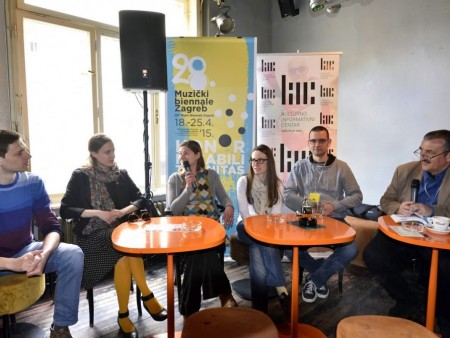 The first Artist Talk, held at noon on the second day of the MBZ in a relaxing atmosphere of the KIC Café, brought the Invisible time and a2, which were commissioned by the Festival, closer to us. Over a cup of coffee we talked with composers and performers of the ballets that will be performed at the Zagreb Dance Center. While the entire team of Invisible time joined us – the composer Ana Horvat, choreographer Melita Spahić Bezjak, percussionist Kaja Farszky and dancer Zvonimir Kvesić – a2 was represented only by the composer Tibor Szirovica. His team, which includes the violist Aleksandar Jakopanec, dancer Ivana Pavlović and choreographer Zrinka Šimičić Mihanović, could not come because of rehearsals for premiere.

“From the very beginning the idea was to involve everyone in the process,” explained Ana Horvat. When she received the commission from the HDS and MBZ, she had immediately known that she would collaborate with Kaja Farszky. Soon after, they asked Melita Spahić Bezjak and Zvonimir Kvesić to join the team. They jokingly added that they had needed a man on the team. The idea of new piece had been developing since December 2014, and although at the beginning they just sat, in the final stage of preparation they are constantly moving. The idea behind Invisible time is time – space – movement – sound – fog. This is “not a dance for music nor music for dance,” as the choreographer Melita Spahić Bezjak pointed out while revealing the concept behind the name of thi work: “The sound is visible, but can also be invisible. Dance is also visible, but can be invisible.” The dance is written for two solos or one duet. Ana Horvat decided to use Kaja Farszky's rich collection of percussions, so Kaja plays conga, bongo drums, bass drum and – clay pots as a melodic instrument. “We did not want all instruments to be classic ones,“ stated Kaja Farszky clarifying the inclusion of a dozen clay pots in the performance. In her work, Ana Horvat combines percussions and electronics, but she wanted the ballet to be acoustic as well, so in certain segments she uses only electronics or only percussions that are simultaneously a part of the set design and on the move. The choreographer pointed out that some movements of choreography explained the words and some were created according to the Morse code, adding that in this performance: ”A dancer has to be present and think while performing.” But mental effort is not all you need as, according to the dancer Zvonimir Kvesić, the choreography is also physically demanding as well as rich and diverse.

The a2 team completed the concept for the new piece approximately ten days ago, and are currently rehearsing. Tibor Szirovica explained the manner in which he had started developing the concept during meetings with the choreographer Zrinka Šimičić Mihanović over coffee. The composer's biggest challenge was composing for viola: “When a violist plays, he is focused on the instrument, so the greatest challenge was to include him in the scene and in the choreography.” In a2 Aleksandar Jakopanec moves across the stage as much as possible, while the composer Tibor Szirovica stands on the side of the stage and plays electronics. “I wrote the score with a dancer in mind,” added the composer and described her performance as “playing on the boards.”

On Wednesday, 22 April at 11.30 PM at the ZPC you can check and listen how playing on the boards actually looks and sounds like, while you can experience the visibility i.e. invisibility of time today same place, same time.